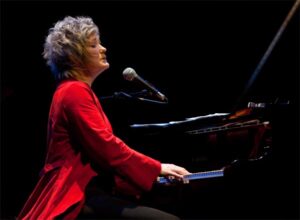 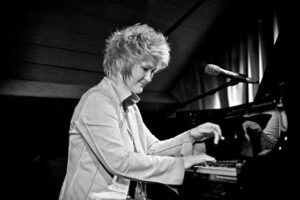 It’s no small accomplishment to be thought of as “The most creative and compelling singer- pianist since Shirley Horn”, but that’s exactly how Joel Siegel of the Washington City Paper described Dena DeRose. If she comes to your city and you want to catch the show, go early, because the room is going to be packed. She not only awes her audiences and music critics with her facility on the piano and her swinging, soothing vocal style but, as Richard Scheinin of the San Jose Mercury aptly put it, “… she exudes joy … what soul!” DeRose always delivers “…vivid and often exciting demonstrations of how innovative her musical concepts are…” (Philip Elwood, San Francisco Examiner).

As a recording artist, DeRose has 14 CDs to her credit, all of which have received superior accolades. Her newest, and third consecutive HighNote release ‘Ode To The Road’ features the incomparable rhythm section of Martin Wind and Matt Wilson with guests jazz vocal icon Sheila Jordan, the legendary saxophonist Houston Person, and the lyrical and swinging Jeremy Pelt on trumpet. DeRose’s past releases have garnered many outstanding reviews in top jazz magazines like Downbeat, JazzTimes, JazzHot, JazzHistoryOnline, All About Jazz, The New York Record, and many other international jazz publications. She’s has been featured on many radio stations in Europe, and has garnered many excellent reviews All of DeRose’s recordings from Sharp Nine, Maxjazz, Vega, GoFour, and now HighNote, have all received no less than 4 stars from Downbeat, and have continued to gain listeners in the U.S. and abroad.

Dena has had many Grammy considerations starting with her Maxjazz recording ‘ A Walk In The Park’ in 2005. Other considerations include her HighNote recording “We Won’t Forget You…An Homage To Shirley Horn” featuring her trio of 17+ years (Martin Wind and Matt Wilson) with special guests Eric Alexander, Jeremy Pelt, and Gary Smulyan. Christopher Louden of JazzTimes writes “…becalmed majesty escalating to vibrant exaltation…”, and Chris Hovan of All About Jazz writes “Over the course of the dozen albums she has recorded since landing in New York in 1991, DeRose has consistently proven herself as a singular pianist and vocalist with a depth of scope that is really something to hear.” The New York City Record’s Ken Dryden wrote “Dena DeRose has grown into one of the most acclaimed pianist/vocalists in jazz during her two decades plus as a professional.”

Esteemed writer, Terry Teachout of the New York Times wrote, “Dena DeRose sings Jazz as if she had been at it her whole life long, and then some”. He was closer to the truth than he might have imagined. Her mother heard her picking out melodies on a toy organ when she was three. She studied classical piano throughout her childhood, until she was enticed into the world of Jazz by playing Count Basie’s music in her junior high stage band. Then, playing piano in the high school stage band and doing wedding and club gigs (playing rock/pop/blues, etc) during the weekends. To feed her insatiable Jazz appetite, at 18 years old, she would drive four hours to New York City to hear piano idols Hank Jones, Mulgrew Miller, Barry Harris, and Kenny Barron, then drive back 4 hours back to Binghamton, NY. It is a rare music career that isn’t peppered with challenges and obstacles, and Dena’s is no exception–her Jazz fervor led her right into a case of carpal tunnel syndrome, aggravated by arthritis, which was severe enough to require 2 surgeries, and forced her to completely give up the piano for over 2 years. With her spirit and her livelihood both in jeopardy, in a club one night, someone dared her to get up and sing a song. She did it, she liked it, and so did the audience. Dena had not only found her ticket out of the physical predicament, but, a few years later when she had recovered enough to add piano back into the act, she also discovered that the singing had helped her add lyricism and phrasing to her piano lines. DeRose has been chosen by Downbeat’s Critic’s Poll as an “Artist Deserving Wider Recognition” in 2000, 2002, 2003, 2006, 2008, 2011- 2016. She has been featured on NPR’s ‘Morning Edition’ on National Public Radio, and three times on “Marian McPartlands’ Piano Jazz” radio show including it’s “30th Anniversary” recorded live at Dizzy’s Coca-Cola Jazz club in NYC with piano greats Kenny Barron, Renee Rosnes, Mulgrew Miller, Bill Charlap, Cedar Walton, Dick Hyman, and others. Dena also appears on the CD “NPR’s Piano Jazz Christmas Compilation”.

Astoundingly, DeRose has also found time to hone her skills as a Jazz educator, and in the past was on the adjunct faculty at some the most prestigious jazz institutes, including Manhattan School of Music, NYU, The New School, Long Island University, Purchase College in New York, The Hartt School of Music in Connecticut, and was on the faculty for 10 years at “New York Comes To Groningen” Prince Claus Conservatoire of Music in Holland.

Ms. DeRose is currently tenured as the Professor of Jazz Voice at the Jazz Institute of The University of Music and Performing Arts in Graz, Austria. She is also a voice teacher at Siena Jazz University for Masters Vocals in Italy. She frequently leads clinics and workshops at such prestigious schools and festivals such as the Stanford Jazz Workshop, Centrum-Port Townsend Jazz, the Dave Brubeck Institute in Oakland, The California Jazz Conservatory, Taller de Musics in Barcelona-Spain, JEN, NJPAC Jazz for Teen Program, The Litchfield Summer Jazz Camp, Jazz Camp West, the Rotterdam Summer Jazz School, and The Royal Conservatory of Music in Den Haag, among others. She has served as a first round judge at the Thelonious Monk Vocal Competition and served 6 years on the NJ Star Ledger Scholarship Awards committee.

As her renown spread to the international scene, feature articles and reviews on Dena have been and continue to be published in the New York Times, Downbeat, Jazz Times, LA Times, Seattle Times, Jazz Is, Jazz Podium, Jazz Hot, Ancona, JazzIt, among several others. Now, Dena is making Don Heckman’s (L.A. Times) prediction come true — that she “…has all the vocal skills needed to rise to the top level of her field”. She is in demand, her passion is stronger and more visible than ever, and she consistently delights her ever-growing worldwide audiences. Alan

Bargebuhr of Cadence magazine succinctly summed up the reason why… simply, she is a “… stunningly talented pianist/vocalist.”