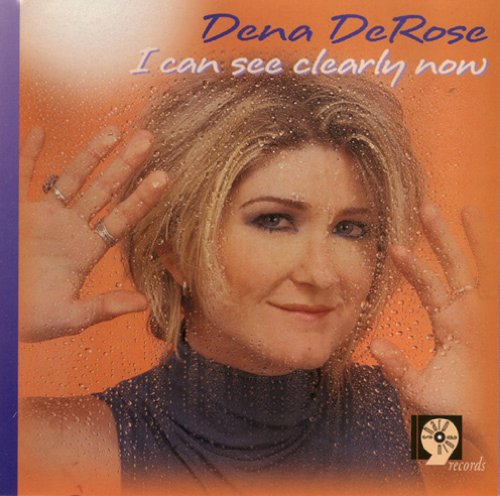 More About I Can See Clearly Now And Dena DeRose

This first year of the new century has been good for Dena DeRose. Her career is thriving and her off-mike life boasts a solid interpersonal relationship. When things go right like this, the on-the-rise artist calls it a new beginning. “Everytime something good happens, I think to myself “Well, it’s beginning now,” says the pianist who sings like gangbusters. “I’ve been beginning forever, and I love it. I’m not looking for fame or big success right away. I’m in it for the long haul.”

The travels and travails that have brought the 34-year-old Binghamton, NY native to this vantage point are worth noting. DeRose started picking out tunes at age two on a chord organ (“My mother would ask me, “Where did you learn that?) and at three and a half, she was taking lessons.

Alternating between organ and piano, DeRose studied and practiced, getting into her first band at 13, a working wedding band. At 15, Dena got her first taste of jazz in a summer stage band, and a year later joined an all-female rock band. Shortly thereafter, while studying jazz with Doug Beardsley, she discovered the unsung keyboard giant, Red Garland. “I loved him,” she says. “He got me hooked.” Other favorites included Ahmad Jamal, Bill Evans and early Chick Corea.

Later, as a student at SUNY Binghamton, DeRose occasionally made the four-hour drive to Manhattan, hearing such notables as Barry Harris and Mulgrew Miller. Inspired, she’d drive home and practice until dawn. the indefatigable DeRose sought out any musical opportunity, and often, by necessity, created playing opportunities for herself. It turned out to be overkill; by her earlly 20’s, her hands hurt excruciatingly, and two operations were needed — one for carpal tunnel syndrome, another for arthristis. “From about age 22 to age 25, I could not play at all,” she confides.

Instead, she sang, surprising, since vocals had never interested her. At a Beardsley trio gig one night, he asked her to sing. “I had a good time, and I began booking gigs where I sag with his trio.” She also took voice lessons from Niki Cukor, a teacher in her 80s “who sounded like a 20-year old.” When Dena came back to the piano, she was a different person. “I had the words in my mind now. That affected the way I played.” she says. “The melody and the story behind the tune became paramount.”

In 1991, DeRose moved to New York City and blossomed. A steady duo gig at Cleopatra’s Needle, with bassists such as Dennis Irwin and Ron McClure was important, as were dates at Birdland (when it was uptown) and the Metropolis, with drummer Jimmy Lovelace’s trio. She recorded her first album in 1996, her second in 1998. She taught privately, still does, and became a faculty member at the Stanford Jazz Workshop.

Last year, a highlight was a performance at the Kansas City Jazz Festival. This year, among many engagements, she began appearing at SMOKE, one of the top NYC clubs, appeared at the Estoril Jazz Festival in Portugal, and recorded I Can See Clearly Now. No wonder she feels like it’s a new beginning.