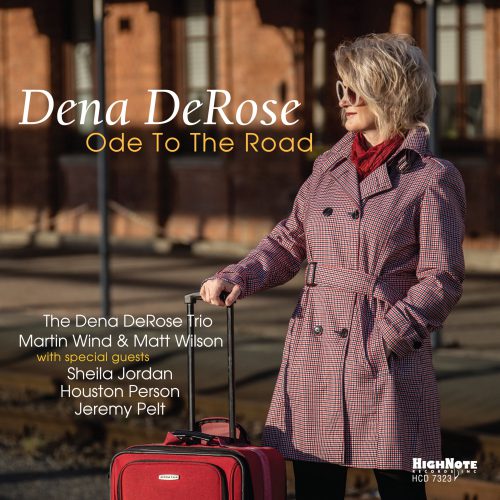 Dena DeRose is a veteran pianist-singer who has long carved out her own musical identity within the modern mainstream of jazz. On Ode To The Road, she is joined by her longtime trio of bassist Martin Wind and drummer Matt Wilson and, on two songs apiece, singer Sheila Jordan, tenor saxophonist Houston Person and trumpeter Jeremy Pelt.

She begins her 11th album as a leader with the obscure Alan Broadbent-Mark Murphy title song and also performs another Broadbent-Murphy piece, the tender ballad “Don’t Ask Why”, plus two Bob Dorough gems, a pair of originals, one tune each by Al Cohn and Roger Kellaway and three standards.

DeRose’s voice has grown warmer through the years and she sounds particularly fetching on the ballads (“Don’t Ask Why”, Alan Bergman-Marilyn Bergman-Marvin Hamlisch’s “The Way We Were” and Alan Bergman-Marilyn Bergman-Roger Kellaway’s “I Have The Feeling I’ve Been Here Before”) while also joyfully trading scat passages with the ageless Jordan on a combination of Walter Jurmann-Gus Kahn- Bronisław Kaper’s “All God’s Chillun Got Rhythm” and Miles Davis’ “Little Willie Leaps”. Her piano playing is boppish without being derivative as she shows on her “A Tip Of The Hat” (a near-instrumental) and a cooking version of Dorough’s “Nothing Like You”. Pelt’s spectacular trumpet solo on Cohn’s “Cross Me Off Your List” and Person’s two appearances (soulful on “The Way We Were” and swinging during Henry Mancini-Johnny Mercer’s “The Days Of Wine And Roses”) are added bonuses.

Close attention was paid to variations in moods and tempos throughout the project and the result is a well-rounded set.


Vocalist and  pianist Dena DeRose shows off her multiple talents on this swinging session where she cuts and pastes guests to her core team of herself with bassist Martin Wind and drummer Matt Wilson. The album is dominated by compositions by classy mainstream jazz pianists such as Alan Broadbent and Bob Dorough and inn the trio format, she’s rich and slinky on “Ode to the Road”, alluring on the sheer Don’t Ask Why” along with Wind’s clever bass” and she intimately bops on her own “A Tip Of The Hat””. She does a pair of hep duets with boptress Sheila Jordan, sizzling with Wind on “All God’s Chillun Got Rhythm/Little Willie Leaps” and diving into a blues for “Small Day Tomorrow”. Smoky tenor saxist Houston Person blows smoke rings on a warm “The Way We Were” and the suave “The Days of Wine and Roses” as trumpet king Jeremy  Pelt swings it on “Nothing Like You” and gets frisky and brassily brawny on the vaudevillian “Cross Me Off Your List”. DeRose herself knows when to stretch the lyrics, give an extra vibrato, swoop or clip the syllables to perfection, making this a wonderful workshop on jazz vocals.


You want to hear a jazz vocal piano trio at the top of the genre’s game? DeRose hooks up with Wind and Wilson again, adds a guest list of Sheila Jordan, Jeremy Pelt and Houston Person, leans heavily on the songbooks of Bob Dorough, Broadbent and Murphy and tying it all together with a definitive version of “Days of Wine & Roses” that leaves you panting for her next outing. Whew! Immaculate, perfect, soulful and swinging, this set has everything you want. Killer stuff that just plain says it all.


Every once in a while, an album comes along that almost demands to be played over and over. Such is the case with Ode to the Road (HighNote—7323) by vocalist/pianist Dena DeRose, from the opener, “Ode to the Road,” an Alan Broadbent tune with oh so hip lyrics by Mark Murphy, to the closer, “The Days of Wine and Roses,” DeRose, who lives in in Austria, has Martin Wind on bass and Matt Wilson on drums, the two chaps who had been playing with her steadily before she left for her teaching gig in Austria, and who are her partners in music whenever she ventures back to these shores. For this 11-tune collection, she also has a few guest artists. Vocalist Sheila Jordan is along for the ride on “All God’s Chillun Got Rhythm/Little Willie Leaps” and “Small Day Tomorrow.” Houston Person adds his tenor sax on “The Way We Were” and “The Days of Wine and Roses,” while Jeremy Pelt’s trumpet is present on “Nothing Like You” and “Cross Me Off Your List.”

DeRose is among the top tier of vocalists on the scene today. Her phrasing is as wonderful as you would expect from a lady who is also a fine jazz pianist. Her voice lies nicely on the listener’s ears, as atmospheric as a stylish film noir. Ode to the Road is an ode to the inimitable artistry of Dena DeRose.

I became a Dena DeRose fan after absorbing the one-two punch of her Live At The Jazz Standard albums back in the early 2000’s. The singer/pianist’s strengths were on full display, and while communication was considerable, agility proved to the music’s key attribute. Ease was central to the success of both albums, and it’s an element her subsequent studio recordings could use a bit more of–including Ode To The Road. While it’s formality marshals certain victories, the spirit of DeRose’s improv instincts is somewhat muted.

The bandleader often has found ways to make well-worn tunes glow anew, but this time ’round, ‘The Days Of Wine And Roses’ and ‘The Way We Were’ have a ceremonial feel, with wisps of formula shrooding the gleam of the performances. Her connection with vocalist Sheila Jordan on ‘All God’s Chillun’ Got Rhythm’/Little Willie Leaps’ as delightful as it might be, seems overly prescribed as well. When buoyancy does arrive, it’s front and center. Bassist Martin Wind and drummer Matt Wilson have been with the pianist for more than 15 years, and the trio’s combined chemistry can be sublime. “Nothing Like You” is a mix of grace and thrust that DeRose completely owns, while still allowing room for a brilliant romp by trumpeter Jeremy Pelt. But etiquette becomes an ally on “I Have The Feeling I’ve Been Here Before”, a break-up lament previously covered by Karin Krog and Carmen McRae that the singer emotionally amplifies with expert contours and nuanced delivery. It’s an unusual choice, and perhaps a reminder: DeRose benefits from avoiding the obvious.