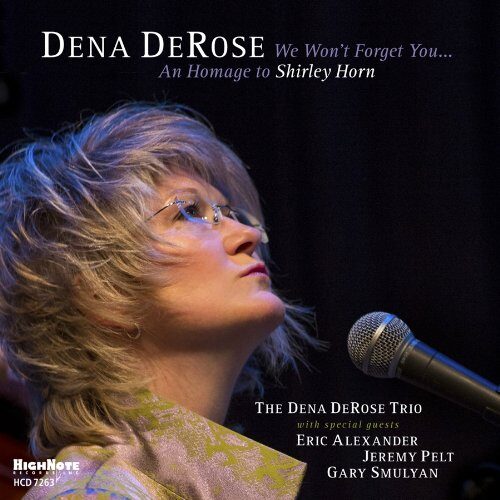 
During her brief trio set at Philadelphia’s inaugural OutBeat Jazz Festival in September, Dena DeRose performed a moving rendition of John Lennon’s “Imagine” that seemed to resonate strongly with the small but enthusiastic crowd. The song’s message of peace and acceptance may have been particularly relevant on this occasion (billed as “America’s First Queer Jazz Festival”), but the audience’s emotional response was typical of DeRose’s performances, according to her longtime drummer Matt Wilson.

“Dena has a really special way of connecting to people,” Wilson said a few hours earlier. “She’s real. Honesty and clarity is what we want, and she offers that with so much grace and so much love.”

On her latest CD, We Won’t Forget You… (HighNote), DeRose directs that love toward her friend and inspiration Shirley Horn. The album is subtitled An Homage to Shirley Horn, which DeRose explains was intended to distinguish it from a “tribute” project. “I tried to bring my own take on some of these tunes, but tried to show the influence of Shirley’s swing,” she says. “Most people know her as a straight balladeer who sang some of the slowest stuff ever, but for me, in the ’60s and ’70s she was really swinging. Her swing was very deep, and most people know that I love to swing.”

DeRose, 48, became familiar with Horn by way of her acclaimed series of recordings on Verve in the 1990s, which helped to introduce the singer and pianist to a new generation of listeners. Having recorded many of Horn’s signature tunes on earlier, unrelated albums, DeRose opted to populate her new project largely with more obscure selections. On someâthe breezy swing of “Sunday in New York” or the finger-snapping cool of “Don’t Be on the Outside”âshe sticks close to Horn’s original arrangements; on others she takes a more radical approachâmost notably on Johnny Mandel’s “A Time for Love,” which she transforms from a poignant ballad into a beaming, uptempo samba.

Horn is best known for her languorous approach to ballads, a style one might not immediately connect with DeRose’s more engaging approach. But DeRose insists that those achingly slow pieces have made an impact on her. “Her use of space and silence, and the patience she takes to tell the story, is something that has influenced me since I first heard her,” DeRose says. “Those are things that I think about all the time, whether I’m making a tribute record to her or anything else. She was just herself, very authentic. She didn’t really sound like anybody else. Maybe in the piano you can hear some Ahmad Jamal and Debussy influence, and I have similar influences.”

There is also the influence of Horn’s dual role as both singer and pianist, which DeRose connects to very directly as a player and vocalist herself. “When she’s singing a line and she goes to play something, it’s coming out of the whole orchestration. It’s all one thing, one musical entity, one musical instrument in a way, just coming out in two ways.”


It’s hard to imagine a better choice than Dena DeRose to honor Shirley Horn. The hushed grandeur and understated elegance that were Horn’s trademarks are just as present in DeRose’s playing and singing. Johnny Mandel once remarked that Horn had two heads, referring to her ability to craft self-accompaniment that seemed entirely independent from, yet remained utterly respectful to, her singing. DeRose shares that preternatural skill.

Horn favored the trio format, working for more than a quarter-century primarily with bassist Charles Ables and drummer Steve Williams. DeRose, too, has been blessed with stellar trio-mates, closing in on her first decade alongside bassist Martin Wind and drummer Matt Wilson. Horn had no middle career, just beginning and end: DeRose draws extensively from both poles, extending from the lusty “Wild Is Love” recorded in 1963 to Mandel’s “Quietly There,” one of Horn’s most sublime signatures, from 1992.

Though Horn is best remembered as a balladeer, she could swing as expertly as Peggy Lee, a side DeRose ably captures across Peter Nero’s jaunty “Sunday in New York,” a sly, slithery “Don’t Be on the Outside” and the darkly sophisticated “The Great City.” And, her affection for the trio notwithstanding, Horn loved horns, recording with the likes of Miles Davis and Wynton Marsalis. Nodding to Horn’s horn worship, DeRose invites three exemplary guests — Eric Alexander, Jeremy Pelt and Gary Smulyan — to enrich several of this intelligent homage’s 11 tracks.


Pianist/vocalist Dena DeRose delivers a swinging tribute to kindred spirit Shirley Horn on this latest release. Her trio of Matt Wilson/dr and Martin Wind/b are hand in glove symbiotic as DeRose plays and sings with authority, verve and lighthearted sass on tunes like the hip and high stepping “Sunday In New York” and the chipper “Wild is Love.” She’s delightful with the delicate bassist on “Quietly There” and is starkly luminous all on her own with “You’re Nearer.” Tenorist Eric Alexander and bari man Gary Smulyan bring in some extra beef on the easy striding “You Stepped Out Of A Dream” and boogalooing “Big City” respectively, while Jeremy polishes his trumpet and glistens with DeRose on “You Won’t Forget Me” and goes Killer Joe with her and Alexander on “The Great City.” DeRose’s voice, timing on the piano and B3 and attitude are all in perfect harmony here on this winning session.